Join the Leica Akademie USA for an intensive week of Street Photography in Venice Beach, CA with Dotan Saguy.

Explore Venice Beach and improve your photography over five days with author of the acclaimed photo book, “Venice Beach, The Last Days of a Bohemian Paradise”.

Dotan will share his approach to shooting street in Venice and uncover his favorite spots. He will also share tips about getting past single street photography clichés and use the camera as a storytelling tool to create a comprehensive body of work.

• Approaching strangers
• The formula for a successful street image
• Achieving complex layered compositions
• How to remedy “photographer’s block”
• What the Masters teach us about shooting in Venice Beach
• Optimal gear and settings for street photography
• Using street photography as a pathway to documentary
• The art of storytelling: How to build a photo essay
• Finding your own personal project

WHO SHOULD ATTEND
Designed with intermediate to advanced photographers in mind, this weekend will focus on shooting techniques, connecting with strangers and approaches to being both engaged and observational as a photographer. This class will not cover basics such as operation and settings of the camera.

Owning a Leica is not required. A selection of Leica cameras will be available for loan throughout the weekend.

SPECIAL NOTES
Enrollment is limited to only 10 participants.

MEALS
A catered meal is included on Sunday. 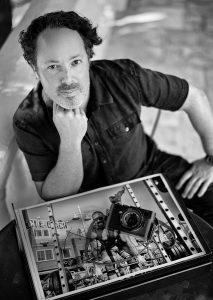 Dotan Saguy was born in a small kibbutz five miles south of Israel’s Lebanese border and grew-up in a diverse working class Parisian suburb. He lived in Lower Manhattan during 9/11 and moved to Los Angeles in 2003.

In 2015, after a successful career as a high-tech entrepreneur, Dotan decided to focus on his lifelong passion for photography.  Since then, Dotan attended the prestigious Eddie Adams Workshop, Missouri Photo Workshop and studied photojournalism at Santa Monica College.

Dotan teaches street photography and documentary workshops for Leica Akademie and Momenta Workshops and his award-winning photographs have been published by National Geographic, The Guardian, The Los Angeles Times and many others.

In 2018 Dotan’s first monograph about the endangered culture of Venice Beach, CA was published by famed German publisher, Kehrer Verlag and was awarded Bronze by the prestigious Deutscher Fotobuchpreis 2018-19.

Dotan’s second book documents the everyday life of a family of vehicle dwellers and their three young children on the streets of Los Angeles. It is scheduled to be released by Kehrer Verlag in the spring of 2020.

Dotan lives in Los Angeles with his wife and two children.